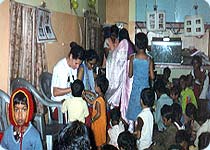 Sasan slum is situated beside the river Ganges in the Kalighat area. The approximate population is 6500.The slum dwellers are engaged mostly in burning of dead bodies. Some are rickshaw pullers, taxi drivers, sweepers domestic helpers etc. Most of the children of this area roam around and some sell the holy mud of the river Ganga, which is required for burning. Some girl children assist their mothers, who work as domestic helper. These children due to the lack of supervision or guidance turn into anti-social elements. WIF tries to give them basic education, which would motivate them to improve their livelihood.

Children in the age group of 6-15 years.

WIF started a Preparatory education centre in an ‘Ashram' at Sasan. WIF motivators and teachers identified children (the age between 3-16 years) living in the burning ghat area and brought them daily to the centre. These children who roamed on the streets attend classes regularly and willingly. Out of 40 enrolled students, at present 30 children attend the centre regularly. 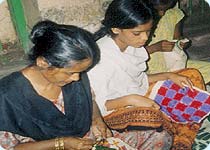 Target beneficiaries : Street and slum children moving in and around Kalighat Sasan slums. 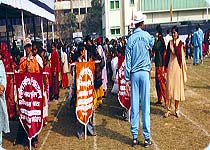 Kumartulli slum is situated beside the river Ganges in the northern part of Kolkata. The approximate population is 25000. The major occupation of the slum dwellers are idol making (on a very small scale), rickshaw pulling, producing paper bags from news-paper, daily laborers at building sites etc. Children between the ages 4-13 are found employed as rag-pickers, scrap-sellers, and girl children as helpers of their mothers who work as domestic help in order to supplement their parents' income. The children are left to their own devices. They lack supervision or guidance from parents who are into drinking illicit liquor or are gambling. The children turn to gambling-with marbles or pick-pocketing and it is a major concern that they would grow up to be anti-socials, unless they receive some basic education which would motivate them to improve their lot.

Target group : Street and slum children in and around Kumurtully. 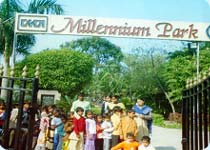 8 students during 2012-2013 were mainstreamed into formal school from these 2 centres.

We believe in developing and working with networks at community, national and international levels with a rights based approach.